MontesantoArte is the first residency program promoted by Fondazione Donnaregina per le arti contemporanee / Madre Museum, under the call of SIAE “Sillumina” (2016 edition) in collaboration with Quartiere Intelligente (Q.I.), a multi- project urban regeneration platform founded in 2013 in the historical center of Naples flanking the monumental stairway of Montesanto.

Curated by Adriana Rispoli, the six month residency program involved four young Italian artists with the aim to promote the most experimental contemporary art on regional territory. Coherent with Quartiere Intelligente’s philosophy and dynamics, the artists were invited to focus their works on the relationship between nature and culture by using cross languages between visual arts, architecture, design, gardening and self-construction. The goal was to create a bridge between disciplines by reaching the community and to produce exportable arts applicable in other contexts.

Mariangela is an architect who graduated from the “Arti Architettura Città,” with a Masters from the University of Roma Tre. In 2011 she co-founded the LAN_laboratorio architetture naturali, an association that experiments bio-architectures with natural materials. In 2012 she set up Metriquali aps, an association that promotes and experiments with bottom up reconstruction of abandoned urban spaces. Since 2013 she has collaborated with landscaper-philosopher Gilles Clement and the cultural centre Manifatture Knos of Lecce in the setting of “Incontri del terzo

luogo”. Since 2016 she has also been a partner of Experience and collaborated with cultural centers (Ex Fadda, Rigenera) and informal research centers (Scuola di Bollenti Spiriti, la Scuola Open Source). Her research activity in the field of art and temporary architecture is embodied in site specific installations and propulsivedevices of social processes that can transform and mark the landscape in urban and rural contexts.

During her artistic residency, Bruno realized the site-specific installation The Dot, a “light sign” positioned on the roof of the Q.I., constructed using the technologies of the DREAM FabLab of Città della Scienza of Naples. The Dot is a three-dimensional sphere built with fir-wood joints reminiscent of local Neapolitan craftsmanship, with a contemporary twist on the ancient artisanal technique. From an alternative educational standpoint, Bruno’s creative process involved students from the Academy of Fine Art, the University Federico II of Naples and most importantly locals from the neighborhood of Montesanto on a daily basis.

Francesca is an architect and landscaper, who has worked and studied in Italy and abroad, spending time in Lisbon, Rio De Janeiro and Paris. In 2016, she attended the École de Botanique at the Muséum national d’Histoire naturelle in Paris, increasing her knowledge in botanical elements. Her artistic production is applied to marginal spaces where spontaneous landscapes arise. Winner of “Un’Opera per il Castello”, with the work Le Jardin (2013) realized inside of the dilapidated guard house of Castel Sant’Elmo of Naples and of the ” Concorso di idee per la riqualificazione di dieci aree urbane periferiche” (2016) for the Salinella’s Park in Marsala. Co-Curator of the Radicepura Garden Festival (2017), the first Mediterranean garden festival that took place in Giarre (CT), she also collaborates with the collective of architects and landscapers Coloco of Paris.

For MontesantoArte, she designed and built the site-specific installation Fern’s Bookcase that mixes the world of nature and culture in a simple yet strong object: a bookcase, an object dedicated to culture, in which books are substituted with ferns chosen as a symbol of resistance. Meanwhile the accurate selection of titles that can be found in the library translates into the different ferns species that, by releasing spores in the air, become a metaphor of the continuous cycle of life and knowledge. Fern’s Bookcase, achieved through a self-construction process, is a prototype that can be repeated and readapted to any space thanks to its modular nature.

Elena studied Art History at the University of Siena. In 2011 she graduated in Visual Arts at IUAV in

Venice. She spent time studying abroad, at the Royal Academy of Art (Konsthogskolan) in Stockholm. Her poetics investigate the relationship between man and the environment that surrounds him, where he lives and interacts every day. Her works have been exhibited in personal and collective exhibitions, including: 16th Quadriennale of Rome, GAM in Turin, and 14th Istanbul Biennale. She has participated in various programs of residence in Italy and abroad. She is the winner of the Thalie Art Foundation grant 2017, VISIO Young Talent Acquisition Prize, EneganArt Prize, nctm and art 2016, m-cult media and technology program 2016. With the project titled Atlante Energetico, she is also a tutor artist for 2016-2017 at the Fondazione Spinola Banna for Art, in collaboration with GAM, Turin. Through a participatory practice, Elena investigates the relationship between the surrounding environment and local communities,analyzing the processes of cultural and social contamination. In the project Speech Karaoke. A che serve parlà si nisciuno te dà aurienzia? realized for MontesantoArte she moves from the homonymous open platform by finnish and german artists, a multicultural project inconstant expansion, that can be shared and reshaped. Through direct interaction with local communities, the artist collected different kinds of materials including political speeches, film fragments, and local collective stories, that will be presented in a live performance on opening night. The intrinsic play of the karaoke is the strategic element of the artist’s work: through a popular modality, the shared elements of a community are revealed, those points of reference that build the identity of a people at every social level.

Valentina has a B.A. in Theory and Practice of Theatre from DAMS – University of Bologna (2005). She won several fellowships for: M.A. in Filmmaking at the New York Film Academy (2006), M.A in Director of Photography at the ESCAC University (2007) and in 2016 she obtained an M.F.A at the DAI – Dutch Art Institute in Arnhem (NL). She was invited to be a Visiting Professor at the Universidad Complutense of Madrid (2007) and Universidad de Castlilla-La Mancha of Cuenca (2007), and is currently a Professor at the University of Palermo. Since 2008 she has created numerous public participation multimedia projects involving collectivity in creating new forms of artistic production based on a common purpose.

In 2014, with Sandrine Nicoletta Chatelain, she founded the DRIFTERS project in London.

Drifters developed for MontesantoArte the video sequel Conkè, accomplished with the direct participation of the residents of the neighborhood and of the team of Q.I.
The video, screened en plein air, is a personal interpretation of local life, in which the daily habits, from folkloristic games to various types of craftsmanship are interpreted in a futuristic manner. Traditionally in Naples, the sacred and the profane, the above and the below, intertwine in a single relentless stream of life. In this tragic comedy, one of the two artists, like an alien in the form of her avatar, becomes the mentor of the flow of time. By combining different esthetical registers through the use of digital technologies and 3D, Conkè extends beyond local boundaries, potentially becoming an open format that is applicable in endless contexts. 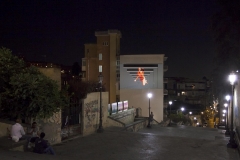 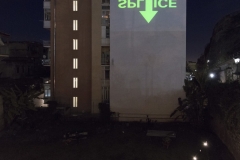 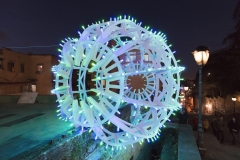 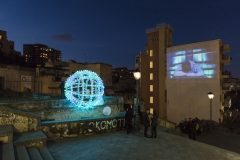 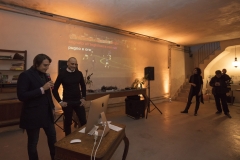